Earlier this spring, Kendall Kramer donated one of her World Cup bibs to the Nordic Ski Club of Fairbanks and now the NSCF Board of Directors is working to expand the club’s display space for mementos from our incredibly talented skiers.

Kramer raced in the Cross-Country Skiing World Cup Finals in March in Quebec, Canada. Kramer’s accomplishment was particularly notable because she was just 16 years old at the time. She may be the youngest U.S. skier to race in a World Cup race, though U.S. Ski and Snowboard Association (USSA) was unable to provide official records verifying the accomplishment. 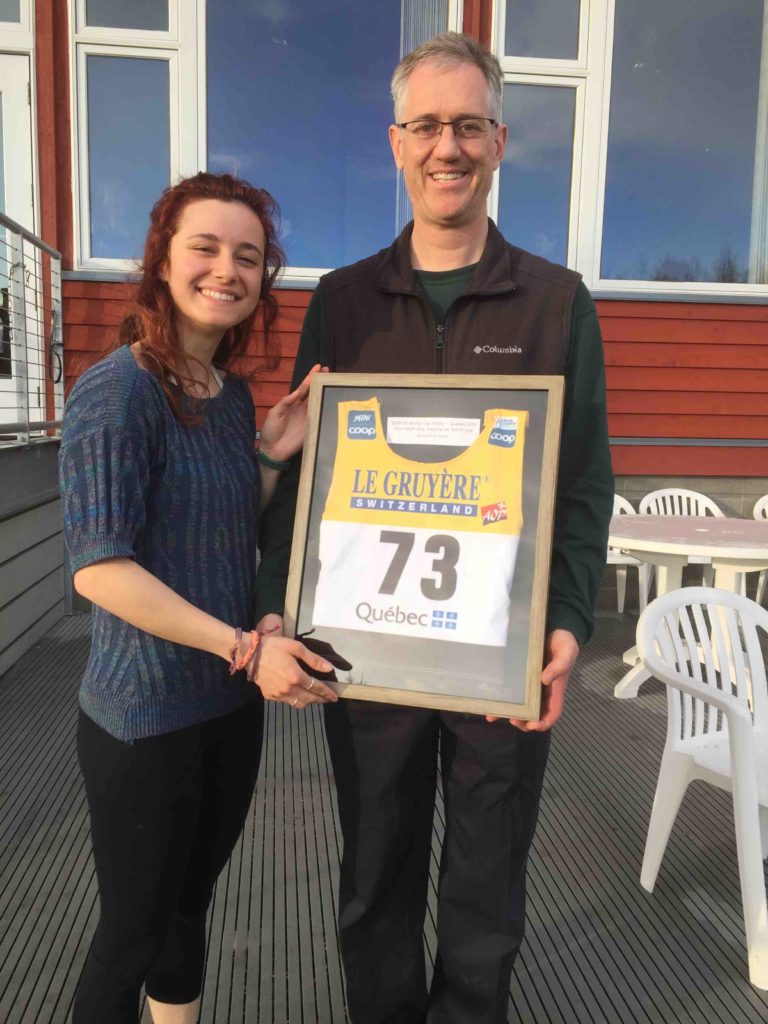 Kendall Kramer presents one of her World Cup bibs to NSCF Board member Peter Delamere. (Photo by Sally Endestad)

“Head coach (Chris) Grover says he can’t remember (a younger American skier) in his 20 years,” Mike Kramer, Kendall’s father, told the Alaska Sports Hall of Fame at the time of the race.

Kendall Kramer, who skis for NSCF-FXC and West Valley High School, had an outstanding ski season in 2018-19. Among many other accomplishments she finished a historic fourth place in a 15-kilometer classic-style race at the World Junior championships in March in Finland. She also won three junior girls races at the USSA Cross Country National Championships in Vermont, won all four events in the women’s under age-18 division at the USSA Junior National Championships in Anchorage, and repeated as the Alaska state high school girls Skimeister (individual champion) here in Fairbanks at the Birch Hill Recreation Area. Oh, and did we mention that she’s been nominated for the U.S. Cross-Country Ski D Team?

“Kendall has honored us with the gift of her World Cup racing bib,” said NSCF President Chris Puchner. “The Fairbanks ski community was exhilarated by her participation at the World Cup Finals in March. Her dedication and perseverance are an inspiration. Her bib will remind us of that exciting time and of what’s possible with a lot of hard work. We are so proud to have her as a member of our club.”

Kendall participated in three races at the World Cup finals. She placed 70th in the freestyle sprint, 47th in the 10km classic and 52nd in the 10km skate pursuit, according to FXC coach, Alasdair Tutt.

“This World Cup event was also a mini-tour, so she placed 51st overall in that,” Tutt said.

Over the years, talented local skiers have given the club mementos and the NSCF Board of Directors would like to display them properly. However, due to our remarkable local talent, the number of mementos have exceeded the capacity of the display cabinet in the Cross Country Ski Center at Birch Hill Recreation Area. This is a problem the board is happy to have, and it is disc