REI recently announced the awards for it’s “Loving Our Local Outdoors” campaign and the NSCF received $3,000! The money will be used for work on the Terrain Park at Birch Hill Recreation Area.

The Terrain Park is in the woods between legs of the Warm Up Loop and replaces the old Terrain Garden, which 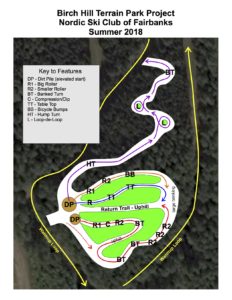 was lost due to the expansion of the Birch Hill parking lot. The Terrain Park is safer and has more variety than the old Terrain Garden. Work on the Terrain Park started in 2017 and much of the work was done in 2018, but it’s still not complete. The REI grant will help us continue the work.

If you didn’t check out the Terrain Park this past ski season, make sure to check it out next season. It’s a hoot!

The REI campaign happened back in March and early April. Every time REI members shopped they got to vote for a group to receive money from the campaign. So, thank you to everyone who participated and voted for the NSCF!