Summer is a good time to feature the hardworking NSCF Board members who help make winters so great here in Fairbanks. This week we feature Board President Chris Puchner in his own words: 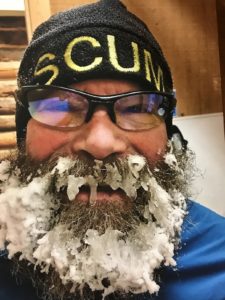 I was born and mostly grew up in Ketchum, Idaho. As the son of an alpine ski instructor and former racer, I started skiing around the time I learned to walk. Parental influence extended to my becoming a Nordic skier as well. In a particularly poor snow year for alpine skiing, my dad started cross-country skiing again. (He had competed while growing up in Wisconsin.) When I visited him in 2000, I was still a diehard alpine and backcountry skier and alpine coach. Nevertheless, I accepted an invitation from him to go cross-country skiing. Initially, it was an avenue for me to spend time with him outdoors, but I quickly discovered that this type of skiing was great way to get aerobic exercise in the winter. I also learned that is fun, much easier to stay warm, and particularly well suited to Fairbanks, where lit trails lend themselves to skiing during the week after work!

I first came to Alaska on a climbing trip in 1976 and realized that this is where I wanted to live and work. So, not long after receiving my geology degree, I found a job in mineral exploration based in Anchorage and moved to Alaska in 1980. Having grown up and enjoyed living in a small town, I didn’t hesitate to move to Fairbanks in 1986 when offered fieldwork based here. I joined the NSCF board when I retired in 2018 out of a desire to help serve an organization dedicated to advancing a sport I love.