See bottom of post for updates on which trails have already been done.

The SCUM had their White Bear brushing party on September 9 (see link to report below). At the bottom of that, they have suggestions on other areas that still need to be done: “There are areas that still need brushing on White Bear from about the 4.5 km cutoff to the 7.0 km cutoff where we started today. Bill Husby also mentioned that the bottom of the Black Hole is another trail needing brushing before winter.”

We need your help! The incredible trails at Birch Hill Recreation Area are only incredible if you can use them. They are in constant need of brushing for both winter and summer use. Summer is the best time to do the brushing. 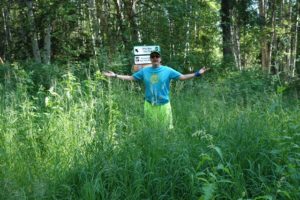 Robert Hannon during a June brushing reconnaissance with a SCUM group.

Head Groomer Tom Helmers says brushing is needed on all the trails. He encourages individuals and groups to head out onto the trails and do some brushing. He does have a few rules:

If you have any questions, contact Tom at trails@nscfairbanks.org

We’ve already had one person (who prefers to remain anonymous) put in 8 hours of brushing this summer! And we know the SCUM were out earlier doing a brushing reconnaissance in June.

If you or your group does some brushing, send photos and a list of the person-hours (hours per person) you put in to fbxskierparent@gmail.com. We’ll post it and try to encourage others to get out and do the same.

Do you want to challenge others? We’ll post that, too (after getting permission from any specifically named parties).

Let’s help keep the trails at Birch Hill in great shape for winter and summer!

Here’s a trail map and update to guide you in selecting trails to brush.

August 8, 2019: The Outhouse and most of the Warm-up trails have been brushed. Blue and Competition are pretty well beat down by the disc golfers. All other trails need help.