Meet the Board: Science, Skiing and the Outdoors Keep Delamere Active

Summer is a good time to feature the hardworking NSCF Board members who help make winters so great here in Fairbanks. This week we feature Board Member Peter Delamere:

I have been cross-country skiing since I could walk while growing up in Colorado. My first skis were wood 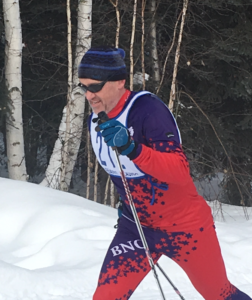 skis with three-pin bindings. I began ski racing in Colorado at age 9 and skied competitively through high school (Boulder) and college (Carleton College, Northfield, MN). I first moved to Fairbanks in the 1990s for grad school. Choosing UAF was easy because: a) I saw the aurora for the first time in Minnesota and was amazed and b) access to skiing and ski racing was very important.

My wife Jen and I moved to Boston, then back to Boulder, and then back to Fairbanks in 2012. We had wanted to move back because we loved Fairbanks as graduate students. Now I am a faculty member in the UAF Physics Department and the Geophysical Institute.

I have been involved with the NSCF since the 1990s when I was club vice president/president in 1997-1998. Since moving back in 2012, I have been an FXC volunteer coach for Jr. Devo while my kids have been FXC participants. More recently, I have rejoined the NSCF board and started co-organizing the Wednesday Night Race Series with Joel Buth.

The Nordic Ski Club of Fairbanks relies on dedicated people to serve on the board. Without board members, we wouldn’t have a club! If you would like to be considered for the board at some point in the future, please send an email to fbxskierparent (at) gmail.com