Peter Delamere won the fourth race of the Wednesday Night Race series of the winter thanks to a generous volunteer.

Eric Troyer, who took third place in the previous race, took the clipboard and stopwatch for this race so that Delamere, the series director, could ski both laps. (Delamere usually tries to ski one lap of the 2.5-kilometer course, so that he’s at the finish line in time to clock the finishing skiers.)

Delamere skied the 5-kilometer course in 17 minutes, 33 seconds. Patrick Lovely took second in 18:01. Matt Stoller rounded out the podium with a time of 18:33. The lead pack, consisting of these three, held close together on the first lap before they spread out during the second lap.

Anna Rix took fourth and was also the first female finisher with a time of 19:27. Hannah Delamere was the second female and first junior, finishing in 21:34. Corrine Leistikow took the third female spot (and was first in the classic division) with a time of 25:49.

Don Hampton was the sole finisher in the 2.5-kilometer division, finishing in 12:59.

The temperature at race start was 5 degrees F, though the skiers said the snow temperature felt much colder. After the race there was some discussion as to whether there was a certain speed at which skiers could break through to reach better glide. Competitor Martin Truffer pointed out that the summation of this phenomenon by physics professor Delamere was an academically unimpressive: If you go faster, you ski faster.

Official results can be found here.

The next race of the Wednesday Night Race series is set for March 18. People can choose to race one 2.5-kilometer lap or the whole 2-lap, 5-kilometer course.

For more information on the Wednesday Night Race series see (https://www.nscfairbanks.org/programs/races/wednesday-night-races/). The series, sponsored by the Nordic Ski Club of Fairbanks, is an all ages and all abilities series of ski races. These family-friendly events are a great way to get to know your ski club, test your skills on the trails, and have a little fun.

Race day registration is on-site beginning at 5:45pm. Races start at 6:30pm. Fee is $5 for one-time entry or $25 for the season.  Races will be rescheduled if temperatures are -5 F or colder.

Photos from the race by Eric Troyer. 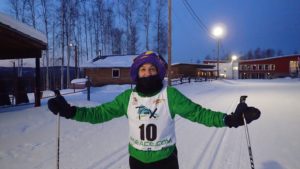 Corrine Leistikow and her silly hat 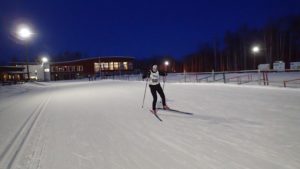 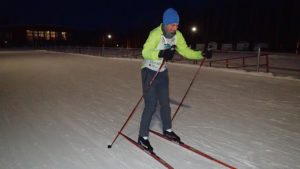 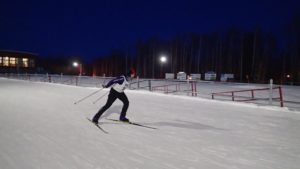 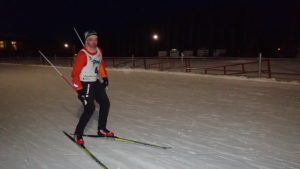 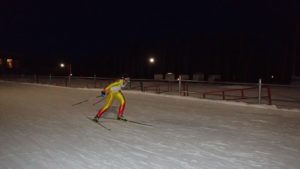 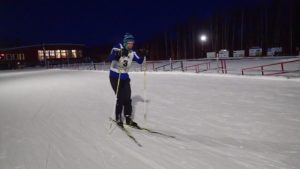 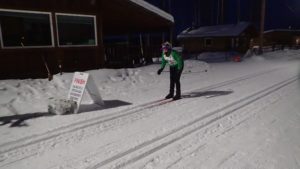