More than 40 skiers from masters-level down to fifth grade entertained the crowds on Sunday at the Kendall Subaru of Fairbanks Ski-Cross on the Jim Whisenhant Ski Trails at Birch Hill Recreation Area. 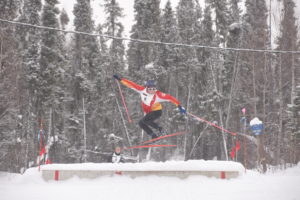 This fourth and final race of the KINROSS Fort Knox Town Race Series was finally held after on Sunday, March 1, after being rescheduled twice due to cold weather. Besides the masters division, the race also included divisions for high school/college ages and skiers in grades 5-8. 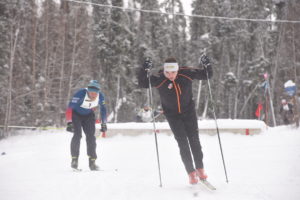 Ski-cross is a popular spectating event, because it mixes up free technique skiing and agility obstacles, including jumps, tight turns and gates. Masters-level skier Martin Truffer was heard groaning every time he had to duck to pass through a gate to the delight of the spectators.

Though the official high school racing season is over, many high-school-age skiers came out to tackle the course. They were joined by University of Alaska Fairbanks skier Patrick Marbacher, who paced the preliminary and final heats for the overall win. Marbacher was followed by Ben Kassoff in second and Nelson Hays. Hannah Delamere took first place in the high school women’s division followed by Zarah Laker-Morris. Leni Stolz took third. 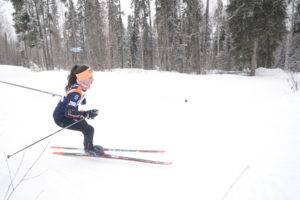 Zarah Laker-Morris leans into a turn in a high school heat. 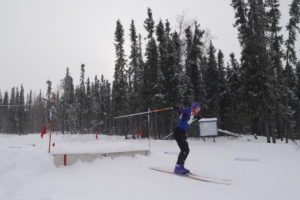 Hilary Saucy lands a jump in a masters heat.

KINROSS Fort Knox is in their sixth season as the series sponsor. Kendall Auto of Fairbanks, a 21-year sponsor, is the presenting sponsor for this event. Fairbanks Youth Sports (a 23-year partner) sponsors the first two races in the series, and new sponsor Wedgewood Resort sponsors the third race. The Nordic Ski Club of Fairbanks also receives support from Fairbanks North Star Borough Parks and Recreation and the Fairbanks North Star Borough School District.

Photos from Sundays events graciously offered by Eric Engman (except where noted). 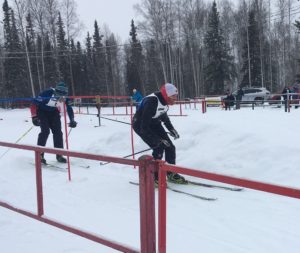 Martin Truffer groans as he ducks to chase Pat Druckenmiller through a gate. (Photo by Chel Ethun.) 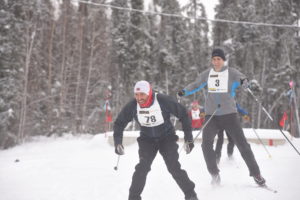 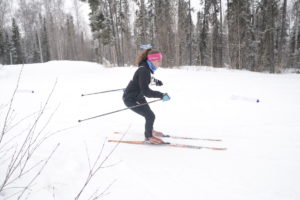 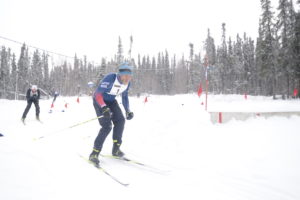 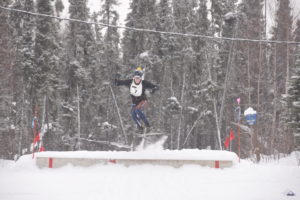 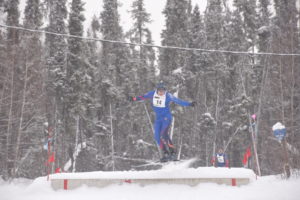