Below is a dispatch from our “European correspondent,” John Estle. Photos at the end. (And here is a US Ski and Snowboard report with video highlights. Look carefully in the bottom group photo of women’s team and you might see some familiar Fairbanks faces!)

Weather:
Rain overnight turning to heavy, wet snow in the AM.  Light snow was falling throughout the women’s race, but turned into heavy snow just before, and during the classic legs of the men’s race before tapering off again. Temperature was comfortably above freezing (but still it was snowing); water was dripping off the tips of the boughs on the spruce trees.  A fun day for the wax techs.

Waxing:
For the women’s classic legs both hairies/zeroes and wax were options.  I believe the US chose wax for the women.  We did not see much slipping in the women’s race, but we didn’t watch a lot of downhills, so don’t know if there were any speed differentials. It didn’t appear that anyone had crazy-good or crazy-bad skis for the skate legs.

In the guys race Luke and Ben made a last minute-decision to go with hairies/zeroes.  With the heavy falling wet snow lasting throughout the classic legs, it was a wise decision, although at the moment it was a “I’m putting it all on the red number” risk.  Luke had a lead after 200m and said he just decided at that moment to punch it and see what happened.  He said his skis were extremely good, and very fast.  Ben’s skis looked good, too.

Jury Decisions
I don’t know exactly what the process was for evidence being presented to the Jury regarding the course-cutting – I don’t know if it was from video evidence or observation.  Novie McCabe said that during the race someone hollered at her that the Germans (who were ahead of her) were going to be disqualified.  So . . . . some coaches must have observed the course-cutting.

After the race when the American fans made it back to the finish, the word (rumors) started that the US, after being fourth across the line, was going to win a silver medal.  The three teams that assembled for the awards were Switzerland, USA and Sweden, which was confirmation of the adjusted result.

However, the rules are the rules, and the protest period had to pass, and protests allowed to be made (I will try to find out if Poland and Germany protested), so more than an hour passed between when the Swiss finished and the flower ceremony.  When we first got back to the finish area, there were lots of Poles and Germans there with cameras to take photos of their medal-winning teams.  However, as the word got around, they gradually melted out of the crowd and headed for the bratwurst kiosk for some comfort food.

Women’s Race Course Problems and Disqualifications Here’s the scoop on the course-cutting.  My description is based upon conversations with a coach who inspected the course prior to the race. Because the courses used for many of the races were different from the courses that the organizers planned to use, I do not have access to maps of both the boys and the girls skate courses – only the girls’ course.

Based on that map alone, it is impossible to tell exactly where the German and Polish skiers cut the course.  So, I believe my description is accurate, but it may be wrong in a few small details.  In general, I think it gives an accurate description of what happened.  This description is a little different from what I sent out earlier.

The boys raced on 2.5Km loops and the women on 3.3Km loops.  Women went first.

On the skate course, in the first 500m or so, the 2.5K went to the right (shorter) and the 3.3Km went to the left.  It sounds like it was more like a narrow V-fork in the trail, rather than a major turn.

Where the trails divided, I have been told that the 2.5Km course was not blocked off by v-board or other barriers.  As I said, it was NOT a sharp turn, and without the barriers, going the wrong way was made a bit too easy to do – although 36 women skied through that intersection, and 33 of them went the right way.

On the third leg, the German skier took the 2.5Km skate course – no tracks or greens on the 2.5Km because it was a skate-only course for the guys, but she went that way anyway.  Her time for the leg was 28.1 seconds faster than was Switzerland’s 3rd leg skier, who had the fastest 3rd leg time for the 3.3Km course.

The effect of the German taking the cutoff was to put Germany into 2nd place, 12 seconds behind Switzerland, and four seconds in front of Poland.

What made things REALLY CONFUSING for US fans standing at 800-900m along the course was the Sophia Laukli had started the leg 15 seconds behind Poland and 24 seconds ahead of the German.  But when the German came by she was in the vicinity of Poland and comfortably (several seconds) ahead of Laukli – BUT SHE NEVER PASSED LAUKLI.  So, in less than 1Km, the German had made up approximately 30-40 seconds on Laukli.  WTF????  We could not figure out what had happened.

On the anchor leg, I believe that the Swiss skier was out of sight of the German, so the 4th German took the same cutoff as the 3rd German.  Izabela Marcisz was Poland’s anchor, and had her head down chasing the German.  She just followed the German anchor right down the rabbit hole.

Not to mention that they were ahead of Switzerland’s anchor, whom they had never passed.

Needless to say the Swiss, American and Swedish anchors were a bit confused by the order of the skiers.

Luckily the Swiss, American and Swedish anchors didn’t let the confusion get to them, and they skied hard all the way to the finish, and were rewarded with gold, silver and bronze despite being the 3rd, 4th and 5th teams to cross the line.

Marcisz may have been able to pull out the win had she skied the entire course – she was 2nd in both distance races, I believe.  She came in 47 seconds clear of Switzerland, and it would be hard to argue that she cut off 47 seconds by shortening the course.  However, she did what she did, and violated the rules.

Novie McCabe was gaining on the Swiss anchor the whole way, taking 23 seconds back from Switzerland to bring the US within 4.9 seconds while simultaneously holding off a charging Swedish team with a gutsy run up the final climb.

The Germans, had they skied the whole course, probably would have been fighting with the Swedes for 4th and 5th, although I might be a bit generous in that assessment.  There is a pretty high likelihood that they would have finished in front of Italy and Russia, but, for sure, they would have been out of the medals.

I am confident that the US would have ended up with a medal had all the skiers skied the full course.  They skied that well.

The real shame is that the fans and the sport missed out on what would have been an unbelievably exciting final leg, with 5 teams in the mix, and lots of opportunities to change positions.

But we’ll take the silver and be happy!

One of the best things about the win was that ALL the US women skied really solid legs.  All contributed equally to the win.

MEN’S RACE NOTES
In the guys’ race, the US also had four strong legs.

Luke Jager set the tone by demolishing the field on the first leg, getting a 25-second gap over a pack of 6 skiers, led by Germany.  Ben Ogden went out pretty hot (his own post-race assessment) and pushed the lead up to almost a minute before coming back to earth and tagging off to Johnny Hagenbuch with 31 seconds in hand, adding 6 seconds to Jager’s margin, with Italy in 2nd place leading a pack of 6 (Italy, Canada, Switzerland, France, Norway, Russia).  Ogden was 2nd-fastest on the 2nd leg, behind only Davide Graz of Italy, who had won an individual distance medal earlier in the week.

Hagenbuch also increased the margin, increasing the US lead to 33 seconds, with the Swiss in 2nd place, as Russia dropped off the chase group, but the other teams (ITA, CAN, SUI, FRA, NOR) remained together.  Hagenbuch was 4th-fastest on the third leg, but only 2.5 seconds behind the fastest skier.

Gus Schumacher was third fastest on the anchor leg only 6 seconds behind Moch of Germany.  However he was carrying a large flag for the final 200m+ and not able to use his poles, so he almost certainly would have had the fastest third leg had he been able to ski all the way in. Even so, he increased the margin over 2nd place from 33 seconds to 35.5 seconds, this time over Canada.

Drolet of Canada began the anchor leg with that pack of five. Their was a little moving back and forth for position early, but the pace began to take its toll, and soon the chase group was shrinking, shedding one skier after another.

Norway was the first to drop off, then France, then Italy, then Switzerland. Finally, only Switzerland and Canada were alone to compete for the silver medal.  By the time Drolet started up the last climb, he had dropped the Swiss – no one was in sight behind him as he neared the top of the hill.

The Swiss started up the final climb in bronze position, but the Italian was coming on strong and passed the Swiss as they ascended the bridge about 200m from the finish, crossing the line 4.4 seconds clear.

For the women, it was the 2nd JWC relay medal performance, after a bronze in 2017 at Soldier Hollow.

The US has now won 5 JWC relay medals in the past 4 JWC.

Also, FIS has a “Mark Hodler Trophy” for JWC – similar to the Nations’ Cup on the World Cup. Norway won the trophy, but the US was second, ahead of Germany, Switzerland, Italy, Poland.

It has been a good week, and tomorrow the US has a shot at a medal in the first-ever U23 mixed relay.  The team will be Kern – Wonders – Fields – Swirbul; CL-CL-FR-FR, each skier goes 5Km. 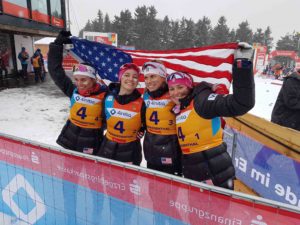 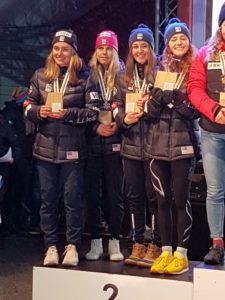 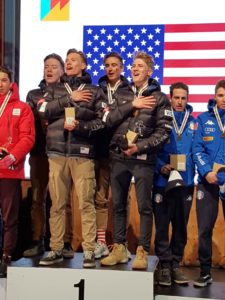 While they were singing the national anthem. (Left to right) Ben Ogden, Luke Jager, Johnny Hagenbuch, and Gus Schumacher. 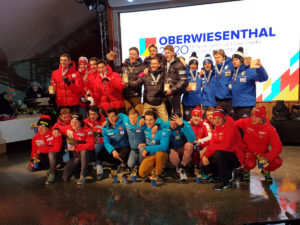