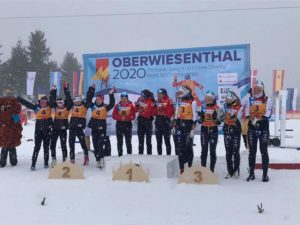 The championships are being held in Oberwiesenthal, Germany.

Below is an account of the race by NSCF European correspondent John Estle. The Fairbanks Daily News Miner will have a story soon. You can also check out the Anchorage Daily News account here.

Waxing was a big challenge for the teams. In the men’s race, Jager and Vermont’s Ben Ogden went on hairies (which use a textured kick zone instead of wax) making the decision just before the start. Jager “won the race” on the first leg, building a more than 30-second gap, which never really shrank from that margin. For the first time in three years, Schumacher was able to bring home a medal without having to chase someone down or burn someone off.

The big surprise of the day in the men’s race was Canada coming in for silver. Remi Drolet skied a fantastic anchor leg, blowing away the Italians in the last couple of kilometers. He looked very tired going up the final climb. North America takes 3 of 6 medals on the day!  Amazing.

The women’s race was crazy. In the first 500-800 meters of the course the classic and free courses diverged then re-merged.  Germany’s third-leg skier (a skater) took the classic course, which gave her a very big advantage.  She had started behind Sophia Laukli of the U.S. team, but after 800-900 meters was about 20 seconds ahead of Laukli. And Laukli never saw the German pass her! The fourth-leg German cut the course in the same place, and Izabela Marcisz of Poland followed her. They had started the leg behind Switzerland, and came past us in first and second, but they never passed the Swiss. It was VERY confusing for spectators.

The finish order was Poland, Germany, Switzerland, USA, Sweden. Poland and Germany were disqualified for cutting the course, so places 3-4-5 end up with the medals.  The award ceremony was held more than an hour after the leaders finished due to jury discussion, protests, hearings, etc.

Had Germany and Poland skied the full course, there would have been a great five-way fight for all of the medals.  It’s a shame they cut the course, but USA will take the medal, it’s second women’s relay medal at the Junior World Championships.  I’m sure there were some upset Poles and Germans.