Note: This story was supposed to have run in the December edition of the Alaska Nordic Skier, but it fell through the cracks. We’re running it now here just in case someone wants to take advantage of the relatively long daylight and warm temps to try to replicate what this trio did.

In late October, the Fairbanks North Star Borough Assembly unanimously passed a resolution supporting action that would create a trail system across Fairbanks.

The resolution was for “Supporting the Development of a Trail Connecting Birch Hill Recreation Area to the Creamers Field Trails System to include a Steese Expressway Trail Underpass.” The University of Alaska Fairbanks trail system already almost connects to the Creamer’s Field Trails via the Fairbanks Golf Course ski trails.

A project connecting all the trails has been talked about for a long time. Some people envision a “Tour of Fairbanks” ski race—perhaps a reboot of the Sonot Kkaazoot—that would stretch from UAF to Birch Hill Recreation Area. While the resolution does not commit funding to the project, it is a big first step in showing community support.

In 2019, three Fairbanks skiers decided they couldn’t wait for the trails to officially connect. They set out on a quest to connect the trails unofficially. Below is an account of their journey, written by Steve Taylor:

February 7, 2019. I scooted out of work at mid-day to embark on a skate ski adventure with a couple buddies, one that we had been wanting to do for quite a while. Owen Hanley, Erik Schoen, and I were going to ski from the UAF ski trails to the Jim Whisenhant Trails at Birch Hill Recreation Area, without skiing on the Chena River, as has been done for many years in the Sonot Kkaazoot. A recently constructed bike path along Birch Hill Road was the factor that made the trek along the north side of Fairbanks now seem possible. However, as it would turn out, the route was not all trails and left us wishing for better connections.

We met at the Ballaine Lake parking lot shortly after noon. The conditions were great: 16F degrees and a bit overcast. We skied north from the parking lot up the 6-mile Skarland Trail. At a power line cut, we left the trail to make our way toward Farmers Loop Road for the first of three major road crossings. We dodged cars as we made our way across to the Seventh Day Adventist Church of Fairbanks. From there we were able to pass through a fence to the Fairbanks Golf Course. The gentle downhill grade of the golf course trail was fantastic, thanks to recent grooming by Stan Justice.

At the far end of the golf course, we again passed through the fence and onto the Alaska Dog Mushers Association’s Jeff Studdert trail system, much of which lies within the Creamer’s Field Migratory Waterfowl Refuge. Again, the skiing was superb as we skirted the north side of the trail system.

(A word of caution: If you use the Jeff Studdert trails, remember to watch for and yield to dog teams. Also, these trails can be a bit confusing. There are trails that parallel each other for while then veer off in different directions. And the signage at intersections is minimal.)

After navigating our way through the inbound and outbound mushing trails near the Mushers Hall, we headed across the east side of the trail system and towards the Steese Highway. 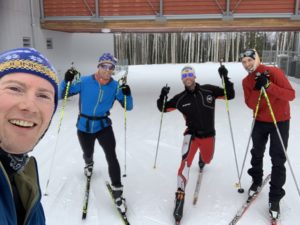 We chose to exit the trail system near the intersection of the Old Steese Highway and Farmers Loop Road. From there it was a quarter-mile hike along road shoulders to the Steese Highway intersection. As the three of us stood waiting for the crosswalk light to change, I couldn’t help but wonder what all the motorists thought of us standing at a busy highway intersection, skis in hand, and no trails nearby. We skidded our way across the icy road surface (ski boots aren’t made for ice!), reached the Birch Hill Road bike path, and put our skis back on.

This is the part we were looking forward to skiing. A friend who lives nearby had told us he recently groomed the bike path, so we were expecting a treat! However, what we found were snow berms and traction gravel all over the path on the way up to the entrance to Birch Hill Recreation Area. The plow truck had just come through! As we found out, the path is fantastic in the summer, but in winter it leaves a bit to be desired. It is too close to Birch Hill Road and is on the only side where plow trucks can push the snow. We finally arrived at Birch Hill and entered the Rec Area on the North 40 trail. After a short pow wow, we decided to leave from a different point along Black Hole.

Once back at the Steese Highway intersection, we retraced our tracks back to the Jeff Studdert trails and continued, this time looping to the south part of Creamers Field. At the west end, we again used the Fairbanks Golf Course, to reach Farmers Loop Road, which we crossed to get to the University ski trails. From there it was a short ski back to Ballaine Lake and our cars.

Overall, the trip was about 20 miles. Most of the skiing was fantastic, but that part between Jeff Studdert trails and Birch Hill Recreation Area (the part addressed by the Assembly resolution) left a lot to be desired. While we were able to connect the dots, it involved a fair amount of walking, several busy road crossings and less than ideal skiing.

A multifaceted proposal to better connect the Jeff Studdert trails to the Birch Hill Recreation Area has been gaining momentum. It involves a pedestrian underpass near the Johansen/Steese intersection (the intersection is scheduled for an upgrade in the near future). That would eliminate the sketchy road crossing. And a path going along the south side of Birch Hill–along the cemetery and through military land–could connect to the Cliffside Trail of the existing trail system.

Think of the recreation opportunities it would provide! In addition to greatly expanding the interconnectivity of the trail system, it would provide an opportunity for the annual Sonot Khazoot to be removed from the Chena River, which has become very unreliable for skiing in recent years.